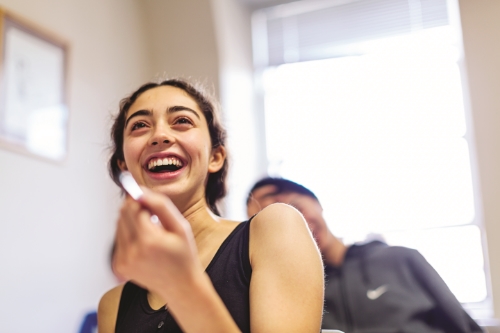 During project week in January of 2016, I shadowed a variety of scientists including biologists, synthetic chemists, biochemists and toxicologists, at a pharmaceutical company called Celgene Avilomics at their Bedford and Cambridge sites.

As is to be imagined, my week at Celgene was more or less a crash course in drug discovery. I was not at all sure what to expect--I had searched Celgene Avilomics online and gotten very little indication of what they actually did. I vaguely knew that they developed anti-cancer drugs, but I had no idea what sort of drugs these were, or even how one would use chemistry to produce them. During my first two days at Celgene, the first in Bedford and the second in Cambridge, I was introduced to the idea and process of drug discovery. My first two days at Celgene were not very “hands-on,” as I spent most of my time discussing the company’s work with my mentor, Eric Schwartz, and his colleagues, chemist Karin Worm, biochemist Alan Corin and computational chemist Claudio Chuaqui. These discussions, however, proved invaluable; drug discovery is not a field a junior in highschool can dive into with next to no understanding, and I definitely got a lot more out of my week because all these scientists helped me gain conceptual understanding of their work.

On my first day at Celgene, I met with two chemists, Eric and Karin. They explained the process of drug discovery: first, biologists will identify a “target,” often a protein, that when inhibited, can stop cancer cells from growing or ameliorate the effects of an immunological disease. With this target in mind, chemists and computational chemists, such as Claudio, will use their knowledge of molecular structure and computer programs to calculate molecules that will bind irreversibly to it, and thus prevent undesirable processes from happening. In cancer cells, for instance, biologists will identify a protein that the tumor cells need to survive, and chemists will design a compound that binds to this protein in such a way that it can no longer perform its function. Once the synthetic chemists have made this compound, they send it to biochemists and biologists who run a series of tests called assays to determine (1) whether the drug is binding to the desired target (it doesn’t always!) (2) whether binding to the target is actually preventing the undesirable effects and (3) whether the drug can actually enter the cells, i.e. whether it is permeable. If a compound meets all three of these requirements, which it rarely does on the first try, it is then passed along to the department of pharmacokinetics, where toxicologists test the molecule in species like rodents, dogs and monkeys to determine efficacious and toxic doses, along with how well it is metabolized and how soluble it is in the blood.

Only after passing all of these initial tests can a drug go on to clinical trials, where it is trialed in three increasingly expensive phases known as Phase 1 (with the fewest patients,) Phase 2, and Phase 3 (with the most patients, even hundreds of thousands.) If at any point in this process, the drug causes harmful side effects or cannot be engineered to fit the requirements, it cannot be brought to market. It became clear to me, then, as the week went on and I talked with more scientists, just how difficult of a process drug discovery is. Pharmaceutical companies have a reputation of being evil and greedy, overcharging people for the drugs they need to be healthy. After being inside a pharmaceutical company like Celgene, however, it became clear that the costs of drug discovery often far outweigh the profits. Billions of dollars can easily be spent over tens of years before a drug can actually come to market. That figure, too, is discounting all of the failed compounds synthesized and tested along the way.

All the scientists I talked to over the course of the week emphasized that drug discovery is more or less a process of failure. Many of them do not have drugs to their name, despite being very bright and having worked in the field for years. One synthetic chemist who I shadowed in the lab, Boris Seletsky, described the process both as rewarding and intensely frustrating. He described how one could work on refining a molecule for a year, only to see it fail in animal trials and be axed by the company. All of the scientists, however, seemed motivated by a common goal: meeting unmet medical need. When I asked biochemist Alan Corin for his opinion on the branch shifting its focus from oncology to immunology, he responded that he still felt that his work was going to be worthwhile, as it could seriously improve quality of life for patients of Rheumatoid Arthritis or Lupus. This sentiment was universal among the scientists--despite all the setbacks, they come to work each morning because they know the compound they make could prolong or improve the lives of hundreds of thousands. And that, to me, sounds exhilarating.

In short, I would highly recommend shadowing at Celgene to any student interested in chemistry or biology, particularly those interested in drug discovery or cancer research. I would only recommend this project to students who are very interested in these fields, however. Because so much of my time was spent in discussion, it was really important that I wanted to know more, and that I asked a lot of questions. Along with learning a lot about drug discovery at Celgene, I also had a lot of fun. All of the scientists were smart, funny and quirky, and our discussions, while always informative, were often humorous. I really appreciated that they treated me with a lot of respect, more like an equal with whom they wished to share their work than like a teenager who had forgotten most of freshman-year biology. They taught me that working in drug discovery can be not only intellectually stimulating and rewarding, but a lot of fun, despite the inevitable failures and frustrations.