Commonwealth and the Mindful Workload
August 25, 2020

How does a Commonwealth education—and the Commonwealth workload—measure up against not just other schools but our internal perceptions and expectations? A recent student survey helped us uncover the answers, as English teacher and twenty-year veteran of the school Catherine Brewster explains.

Every morning at announcements, when Ms. Dale or another teacher reserves 2A for guided meditation the next morning, I wonder briefly how different alumni/ae might respond. Would it be a "Great idea; I could have used that back in my day" from some; a "Ha! When I went to Commonwealth, we prided ourselves on how much we could take" from others?

A relatively new practice within our walls, meditation is only a small piece of the outcome of an ongoing process that began in the spring of 2019, when we began studying our culture with the same intensity that we direct toward every other subject: How do our students—both those who speak up about it and those who don't—feel about their work here? How many hours do they spend on it? How do, and don't, they handle the stress built into their lives? Is Commonwealth a more stressful place than its peer schools? Do more students feel satisfied with the nature of the work their teachers ask them to do? (Spoilers: no to the first, and yes to the second.)

Also as with all the subjects we study, we started with conversations. The Peer Advocates worked with each other and with Josh Eagle and Eben Lasker (dean of students and school counselor), to develop a set of questions about stress and school culture. They surveyed their classmates and helped shape the inception of a group of faculty and staff called the Student Life Task Force.

That task really doesn't depart from the work I and other advisors do one-on-one, with every student from ninth grade all the way to graduation. As teachers, we ask the very best of our students' intellectual selves, but the period after any class might find us sitting with an advisee, in pursuit together of ways to get enough sleep, exercise, and joy. We're also aiming to make sure the homework part of the day includes joy, too. We might be talking over the calculus jokes wafting in from the gang of friends sitting in the hallway.

So the "force" part of "task force" means, you might say, articulating those priorities on a larger scale, and broadening and deepening their reach. More nostalgic Commonwealth graduates might point out a past form of this endeavor: the Roller Skating Committee, the group of students devoted to upholding and updating the spirit of Mr. Merrill's famous "only rule." (For those who haven't memorized it, this was "Don't roller skate in the hallways. Don't be a damn fool. Give some thought to your actions and how they affect other people.") Mr. Merrill and the Roller Skaters started from the premise that teenagers can learn to lead thoughtful lives built around a larger sense of the meaning of school.

These are aspirations. Lots of us who "cling like barnacles" to the place, as Eric Davis once put it toward the end of his decades teaching English, fervently believe we live up to them. But Mr. Wharton's Language and Ethics students learn about confirmation bias. Can student and teacher barnacles ever know to what extent students, as a whole, embrace these principles?

The building also teems with scientists, who seek out data when they want to test their assumptions. This quest led the task force to a group of researchers at Stanford University. The group's vision includes ideas that overlap with ours: "Challenge Success recognizes that our current fast-paced, high-pressure culture works against much of what we know about healthy child development and effective education. The overemphasis on grades, test scores, and rote answers has stressed out some kids and marginalized many more. We all want our kids to do well in school and to master certain skills and concepts, but our largely singular focus on academic achievement has resulted in a lack of attention to other components of a successful life—the ability to be independent, adaptable, ethical, and engaged critical thinkers."

To this end, Challenge Success has been surveying students, 30,000 at ambitious high schools, public and private, across the country. Ninety-eight percent of our students took it in the late fall of 2019, with truly exceptional results. In relaying the figures on "purposefully" and "fully" engaged students (see sidebar), as well as academic honesty, the researchers said they "had never seen a school like this," and called Commonwealth "off the charts."

Any teacher or administrator would rejoice at this endorsement. Some advisees told me they were relieved that Commonwealth's identity had been affirmed, that "hard" work would remain at its core. Two-thirds of our students think their homework load is about right. But that means another one-third said they had too much, including other advisees of mine. If we dismissed their responses, that would change the school's identity.

My advisees were representative of the "it's too hard" group in that they were younger. Crunching the numbers, we saw that eleventh and twelfth graders actually report less academic stress and better time management. In conversation, my junior and senior advisees and students said they and their classmates no longer bragged about how little sleep they'd gotten. They described it as a ninth-grade habit that people got over (as they also learned, in fact, to get more sleep).

So the numbers didn't end the conversation, and they weren't supposed to. The Student Life Task Force sought to channel it more reliably. The faculty agreed to two homework-free weekends this year, which were enthusiastically received even by students who didn't think they were overloaded. This fall, each class elected two representatives, who serve as liaisons between their classmates and the task force. Dr. Christopher Willard spoke about mindfulness to the faculty, at a parents' evening, and at an assembly.

As they have since 1957, students and teachers will go on generating and arguing over ideas about how the place could be better. A faithful band of students with the name COMMunity is organizing movie nights and dances at school. For one lunch last fall, the Task Force grouped teachers and students together without telling them why they were at the same table. Another day, small groups of students—equal parts "athletic" and not—got together to talk about Commonwealth's sports program and how it could fit better among their other commitments. On all these days, any alumnus or alumna could have found some change to be elated or dismayed by, while another could have pointed out what's the same as ever: students having fun in class, chattering idly, making art, complaining, exulting, and doing their homework.

Designed to help schools improve student well-being and engagement with learning, the Challenge Success Student Survey for middle and high school students "measures perceptions of their academic engagement, connection to the school community, physical health and well-being, technology use, family norms, and how they use their time outside of school.

129 of 133 Commonwealth School students took the survey online in November 2019. Here are some notable result: 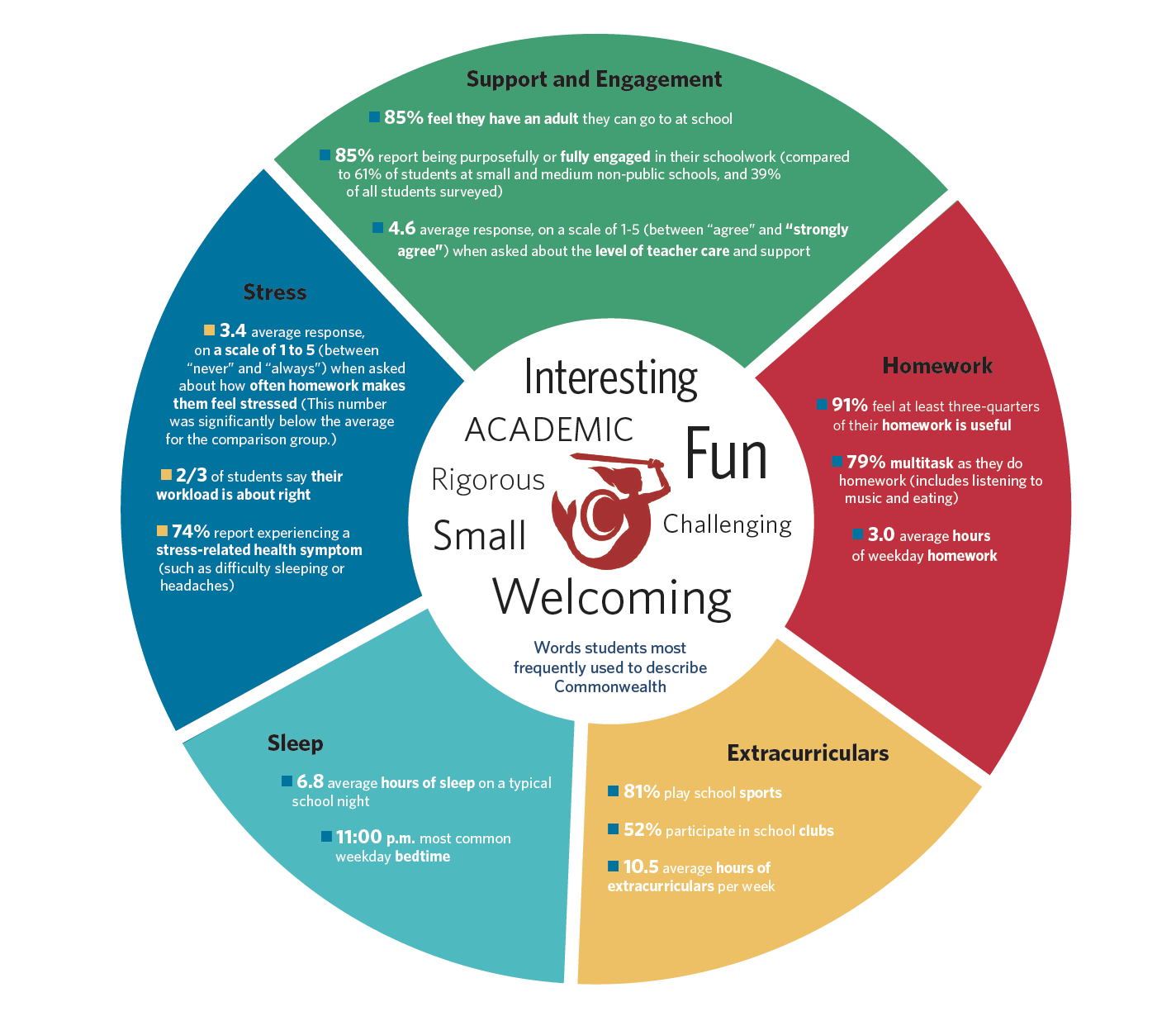